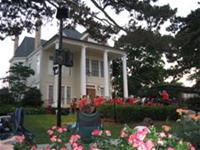 For over 40 years, the Village Band (comprised of volunteers) has provided free public concerts in Cook Park. These concerts are one of the favorite summer events that make Libertyville so special. Although supported by the Village of Libertyville, the band would not function without Director Corey Ames and Manager Paul Schmidt who work with the volunteers to provide wonderful concerts.

The band presents FREE concerts patterned on traditional public concerts given by village bands around the country since the 19th century. Music includes patriotic selections, concert medleys, show tunes, light jazz selections, light classical music, and novelty pieces. Music is selected to give a good balance and variety for both the players and the audience.

The band performs at 7:30 pm at the Rose Garden in Cook Park on Thursdays in 2019, June 20, June 27, July 11, July 18 & July 25. The special concert on July 4 takes place at Butler Lake Park for this concert, the fireworks begin at the same location immediately following the concert. The public should bring lawn chairs or a blanket to sit on, although in Cook Park there are a few picnic tables available as well. For the Cook Park concerts, the public may visit nearby restaurants that are happy to put together picnic dinners, and of course people may bring their own food from home. There are no restroom facilities in Cook Park, although the Cook Library is located behind the park and its facilities are available.

For the Butler Lake Park concert, there are no nearby restaurants, so the public may bring food from home. Portable toilets are located around the park. Parking within Butler Lake Park is limited to a few spots that are used by the musicians. Most people park in the public lots a few blocks to the east, or on residential streets to the west, and walk to the park. The fireworks begin with the end of the last song of the concert, and the same area used for listening to the band is also ideal for watching the fireworks.

There is no contingency location in the event of inclement weather. Concerts are presumed to occur regardless of weather reports. On the rare occasion that a concert is canceled it is often 30 minutes prior to start time. If it is raining but stops shortly before the start time, the show will go on. If the weather changes for the worse during a concert, the show will end early.

Please consider other members of the audience and keep conversation to a minimum during music. Parents should keep children with them and not allow them to run and play near the band.
Agendas & Minutes
Business Directory
Pay Online
Notify Me
Area Attractions
Sports Complex
Government Websites by CivicPlus®
[]